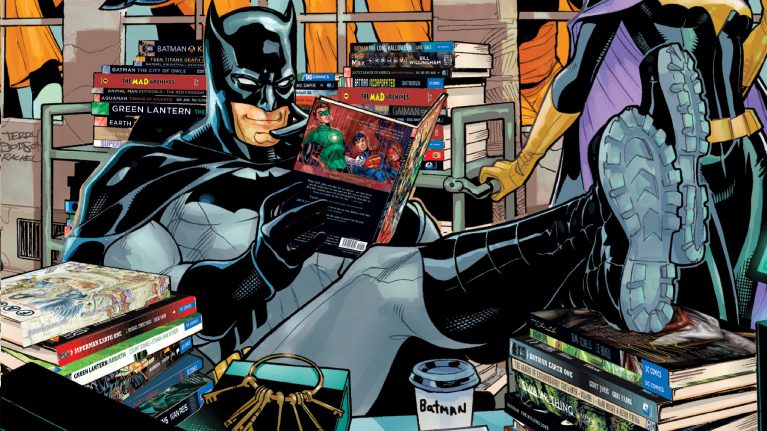 From superhero books to newspaper strips to manga, reading comics is a fun and rewarding hobby that people of all ages can enjoy.

Yet given how long comic book icons such as Spider-Man and Batman have been around, it can be intimidating to try and dive into a series if you don’t know where to start. And that’s assuming you know which series to start with in the first place…

But don’t worry – there are plenty of ways to get up to speed and start enjoying these amazing stories. With the tips and tricks below, you’ll learn how to read comics like a pro in no time!

How To Read Comics: A Guide For New Readers

First and foremost, what type of comic do you enjoy?

Comics, like any other storytelling medium, are as diverse as the people who create them. Even so, some archetypes have proven more popular than others. Some of the most popular types of comic books you’ll find today fall under a few main categories…

You know the drill: superhero comics are where you’ll find iconic characters like Superman, Batman, and Spider-Man. These comics feature characters who use their superhuman abilities to fight crime and protect the world.

Long-running superhero comics tend to focus on creating the “illusion of change” while maintaining a status quo. All the same, there are still plenty of amazing standalone stories featuring these kinds of characters that give you a satisfying beginning, middle, and end.

Whether you’re into long-running soap operas or bombastic blockbuster stories, you’ll likely find a superhero comic for you.

The term “indie comics” has come to refer to almost any US-style comic that isn’t about superheroes (although some indie comics are about superheroes, but that’s a discussion for another day). Popular genres include sci-fi, horror, and autobiography.

The biggest indie comic success of all time is indisputably the Teenage Mutant Ninja Turtles, which originally debuted as 40-page black and white comic back in 1984.

Since then, The Walking Dead, Ghost World, 30 Days of Night, Road to Perdition, Paper Girls, and countless other films and television shows have come out that began life as an indie comic or graphic novel.

Manga is a type of comic that originated in Japan and is characterised by its distinctive artistic style and storytelling conventions. It can cover a wide range of genres, including action, romance, and horror.

Manga sales have recently surpassed US comic book sales in the United States, demonstrating how popular the format has become.

Other popular types of comics include:

Because there are so many different types of comics available, don’t be afraid to experiment with different genres and styles. You may be surprised by what you like!

2. Do A Little Research

Once you’ve decided on a series to read, it’s a good idea to do some research and learn a little about the series’ context and history. This can help you better understand the story and characters.

So, where do you start?

Wikipedia, a creator or publisher’s official website, and fan guides (like this one here!) can all be useful, covering everything from the fundamental facts you need to know to the most minute details.

Read guide books and encyclopaedias: There are a ton of great guides to the most popular comic book characters out there which can give you a great overview of key stories to know about. Here are some good ones to get you started:

With all this research you’re looking to learn two things:

3. Find Your Jumping On Point…

When starting a comic book series that has been running for a while, it can be intimidating to try and catch up on all the previous issues. Instead, try to find a “jumping-on point” – an issue or story that is specifically designed to be easy for new readers to pick up.

Often when a new creative team starts the book gets rebooted numbering. While there may be something of a continuity hangover from the last run, a new #1 (or “volume 1” for a collected edition) can make for a great jumping on point.

Another good way to start is to look for standalone issues, limited series or graphic novels. These are standalone stories that don’t always tie into the larger continuity but can serve as an introduction to the characters and their world.

And yet another great way to start is with the classics. If you’ve heard of Watchmen, Fun House, Maus, The Dark Knight Returns or any other titan of the medium and you think they sound interesting, then start there.

Whatever happens, you’re going to learn something about what you like – even if it’s by finding something you don’t like.

4. …And Prepare To Jump Around

It used to be “proper” to read a comic book in chronological order, but that’s become less important in recent decades.

New creative teams, reboots, and stories set all across the timeline have become more common, which means that the first issue of any story you’re interested in is often the best starting point.

Every decade of comics has some great stories. The current X-Men comics are great, but the classic stories of the ‘70s, ‘80s and ‘90s are just as important for understanding the characters. And – most importantly – these comics make for cracking reads as well.

This all means it’s okay to read stories out of order. Just start with something that interests you, and build out your knowledge from there.

All the same, be warned: you may get big story lines or events spoiled. Them’s the risks of jumping into a decades-old continuous story, I’m afraid.

5. Don’t Be Afraid To Ask For Help

If you’re still struggling to work out where to start, don’t be afraid to ask for help from other comic book fans or the staff at your local comic book shop (LCS).

Many comic book fans are more than happy to help new readers understand the intricacies of a series. Long-time fans can offer valuable insights and the best recommendations on where to begin reading.

And if you don’t know any real life fans, you can always ask me! Drop a comment with your question below or email me here and I’ll do my best to point you in the right direction.

My final piece of advice is not to overthink it. Reading comics should be fun, so don’t worry too much about understanding everything right away. If you want to learn how to read comics, simply pick up the next comic you find and allow the story to unfold.

As the famous X-Men quote goes… we hope you survive the experience!