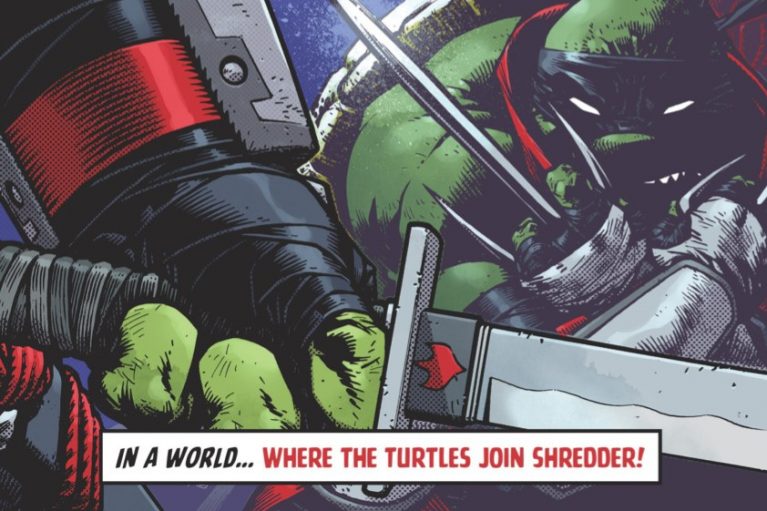 Way back in the before-times of March 2016, Teenage Mutant Ninja Turtles publisher IDW hit upon a unique idea for a company-wide crossover.

Given the number of licensed properties the publisher held, a crossover like DC’s Crisis or Marvel’s Civil War was never going to work within the main continuities of each separate book. Instead, Deviations matched IDW’s properties around a thematic premise, rather than a narrative one.

The theme? Five standalone issues focused on a single point of deviation (there it is) from the original comic book timeline. 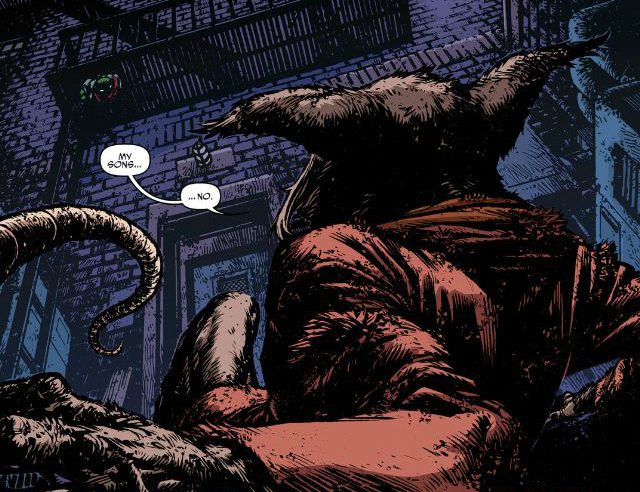 Teenage Mutant Ninja Turtles: Deviations rounds out the event with its own what-if moment from the epic City Fall arc. In this timeline, an extra twist of Shredder’s blades causes all four of the Turtles to fall under his tutelage, rather than just Leonardo.

It’s a big concept for the Turtles – and it’s one that provides a fertile story ground.

What’s both chilling and fascinating about TMNT: Deviations is that the Turtles are still recognisable even whilst being merciless. 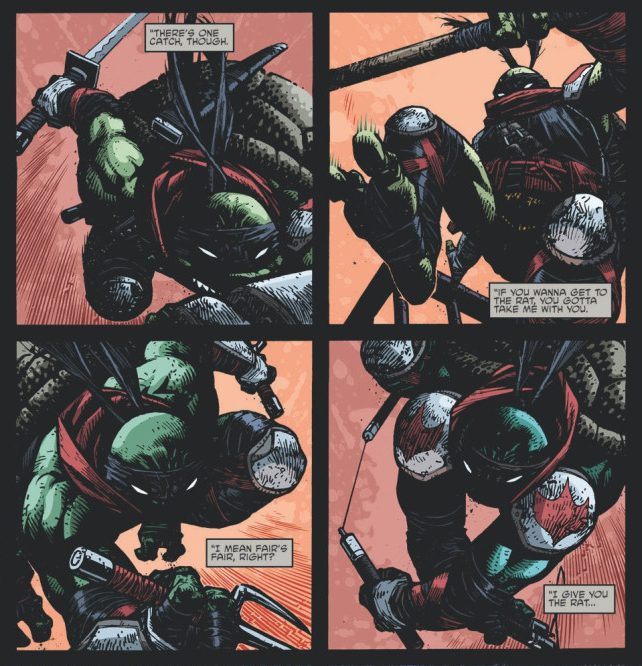 Leonardo is stoic and authoritative, Raph is mean, Michelangelo is goofy with a cruel streak whilst Donny is, uhh…

OK, so there’s not much here for Donatello fans, but Bobby Curnow and Tom Waltz nail the voices of the other three. When you know the characters it makes for compelling reading.

The plot starts with a series of moments but quickly escalates as more and more of the IDW TMNT world is brought into play.

That’s fine, as fans of the book would want to see how each of their favourite characters fares in this dark new world. Yet as the book reaches its halfway point, it starts to feel like it’s coming off the rails. 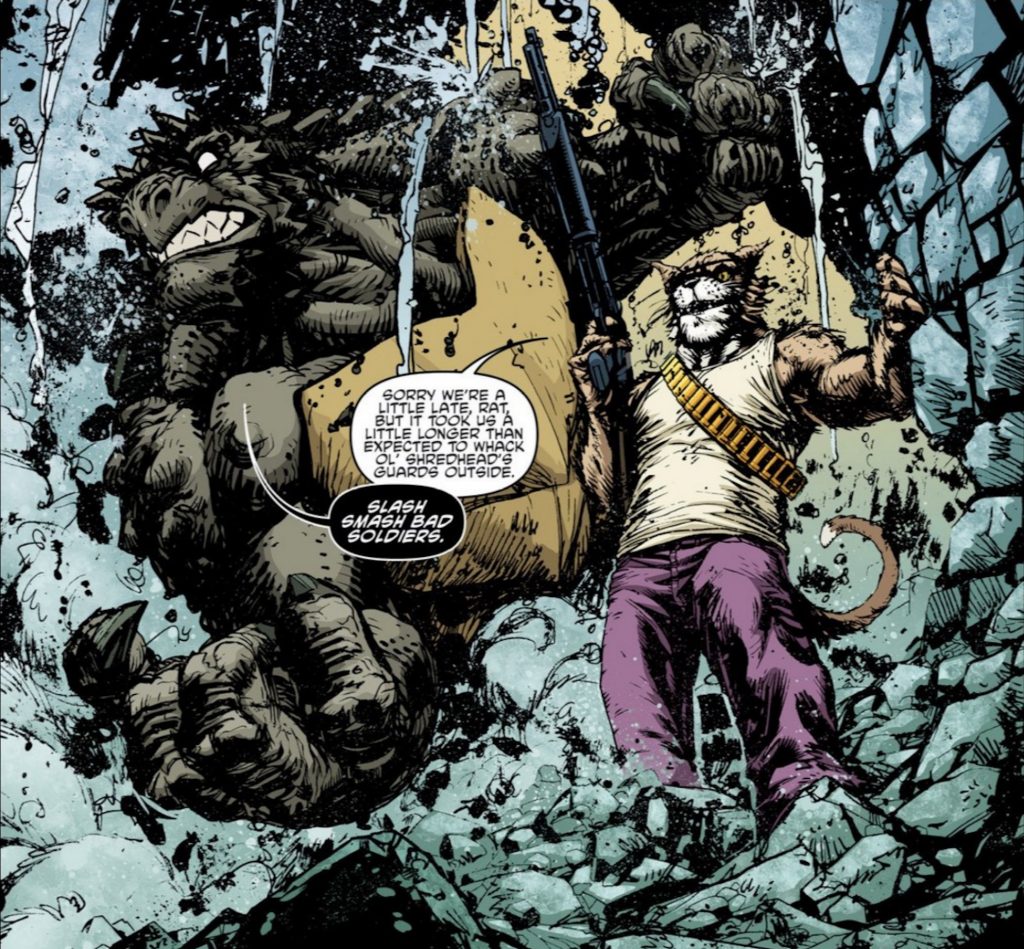 Something that often happens in What-If style stories is that the story is so tightly compressed to fit the concept into the page count that it suffers as result. And so whilst Teenage Mutant Ninja Turtles: Deviations is a fun excursion into a nightmare, it definitely has too much going on for a single issue.

I would have loved to have seen more about Karai’s insurgency, or Casey Jones’ Dad getting his gang back together, but these rich subplots are merely touched upon before they all crash together in the climactic battle.

TMNT: Deviations shares another similarity with old What-If comics, and that’s the horrendous body count. It can’t help but feel a little cheap; but still. These tales exist to show us what we all wanted to see when we were 12.

You can’t fault the book for delivering on the premise.

Straight up, the artwork is spectacularly good. Zach Howard and Cory Smith combine to create a dark, scratchy story world. The layouts are dynamic and punchy whilst the detail rendered in Joylon Yates’ kinetically sketchy inks is a joy to behold.

The action scenes are easy to follow and each character ebbs with life. Splinter in particular is given huge emotion through his big, black eyes.

Ronda Pattison does a great job on the colours for the most part, but the end of the book feels jarring compared to the rest of the pages.

In fact, the artwork as a whole appears rushed towards the end of the book. It’s not bad, but given the high standards for the majority of the pages, it is a noticeable drop-off.

Still, it’s not a dealbreaker. For the most part, the art team deliver in spades.

IDW loaded the issue with extras, well above and beyond what you would expect to find.

The complete breakdown of making the first page is a highlight. This covers everything from Curnow’s plot and Waltz’s script to Howard’s art, Pattison’s colours, and Shawn Lee’s lettering.

For someone who grew up wanting to make funny books, it’s a huge thrill to see how the page came to life.

Teenage Mutant Ninja Turtles: Deviations is a captivating excursion into a much darker NYC. It’s a bit rushed in pacing and execution, but it absolutely nails an over-the-top grimdark vibe. New readers or Turtles cartoon fans might struggle with the overload of unfamiliar characters, but the storytelling is still clear.

For a one-shot, TMNT: Deviations is a lot of fun. Its biggest flaw is that it’s all over too soon.

Like the sound of Teenage Mutant Ninja Turtles: Deviations? Pick it up today as part of IDW’s Deviations trade paperback collection: 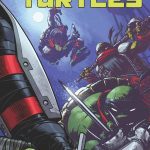