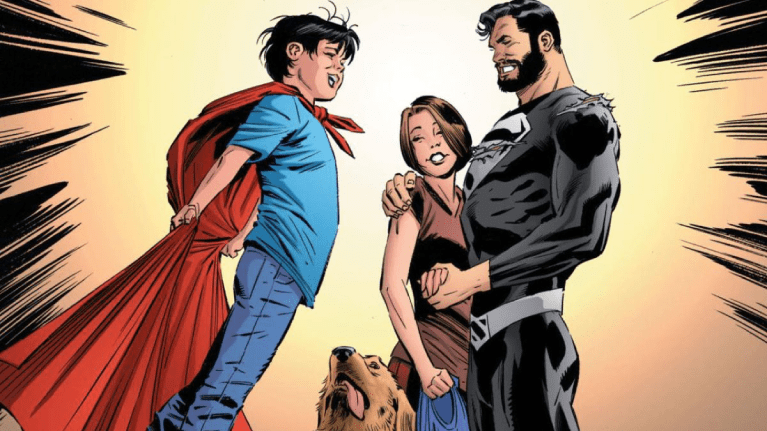 2022 has really turned into my big DC Comics year, huh? Following on from recent articles on Batman and Joker, now it’s time to take a look at DC’s other bigshot – the ol’ blue boy scout himself, Superman.

To kick things off we’re looking at Superman: Lois and Clark. It’s a title that feeds directly into the DC universe’s most recent reboot, 2016’s Rebirth, and it requires a little bit of general comics knowledge before heading in – by which I mean a general familiarity with alternate realities and the basic concepts of Superman.

If you’re au fait with that, you should be OK.

I’ve tried to keep details vague but be warned: there are minor spoilers ahead!

What is Superman: Lois and Clark?

Well, it’s not just a fondly remembered 1990s TV show, that’s for sure.

Superman: Lois and Clark was an 8-issue DC Comics miniseries that ran from October 2015 to May 2016. 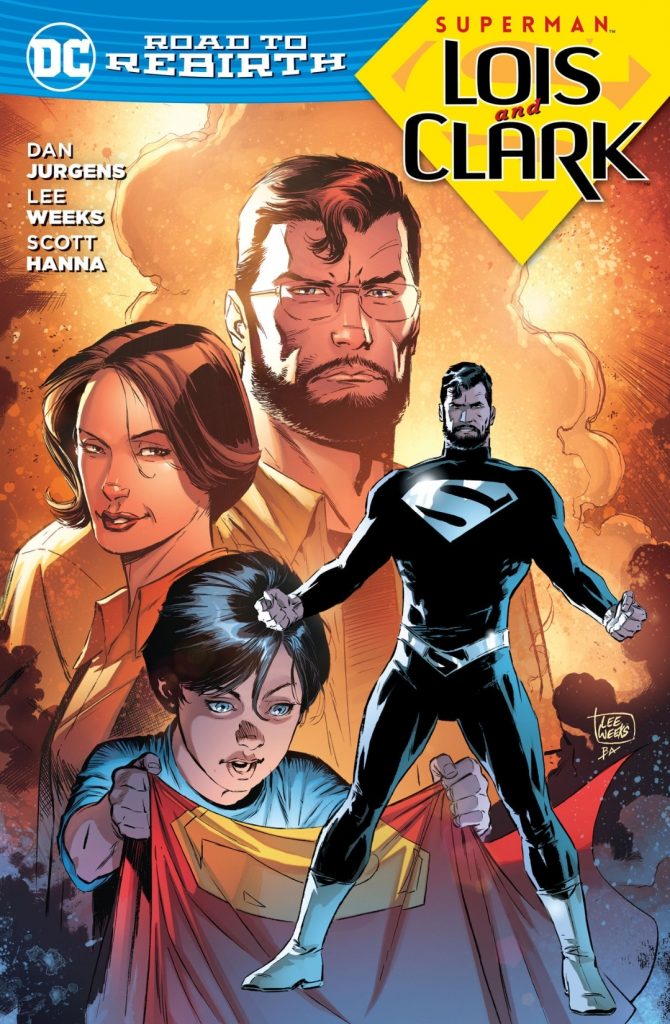 Written by longtime Superman scribe Dan Jurgens and with art primarily by Lee Weeks, this miniseries tells the story of Lois Lane, Clark Kent, and their infant son Jon, as they settle in the background of the “New 52” DC Comics universe following the end of their own universe.

If you’re new to DC Comics and this all sounds confusing, don’t be put off.

The premise of Lois and Clark hiding to fit into their new world is the main theme of the book, so a lot of the changes to the universe are seen through the eyes of the characters.

This means it’s a surprisingly new reader-friendly book – even if a few beats feel like deeper dives than others.

Dan Jurgens is no stranger to the Man of Steel, having written for the character in several stints since 1989 (most notably including 1993’s The Death of Superman). As such, it’s no surprise he shares a real rapport with the characters.

His take on Clark Kent is a pleasure to read. Adorned in a neat black suit and beard, Clark operates in secret, doing all he can to prevent catastrophes around the world whilst hiding his existence. 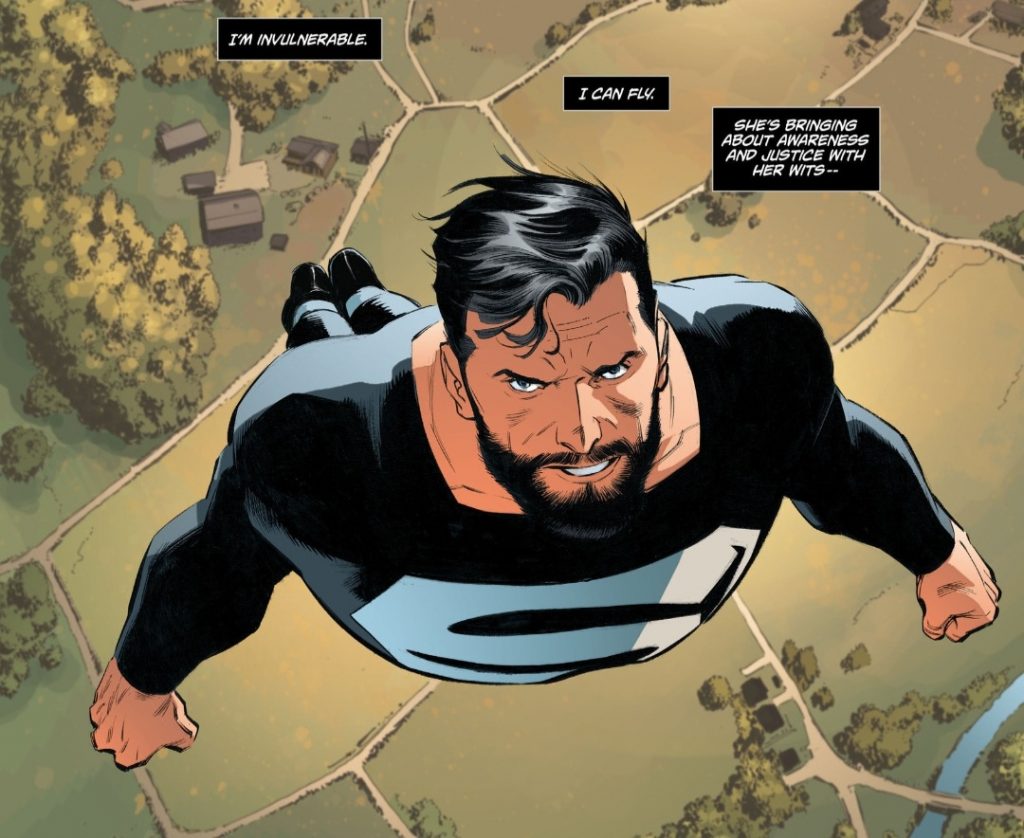 This includes using knowledge of his own universe to keep tabs on potential friends and foes. This includes a questionable (if understandable) invasion of Lex Luthor’s privacy, but it mostly plays out in his main story arc as he seeks to prevent this universe’s Hank Henshaw from becoming the villainous Cyborg Superman.

In lesser hands Superman can feel distant, or preachy, but this is one of the better versions of the character. By equal measures stoic, warm, principled, and thoughtful, Clark is at once both aspirational and relatable.

Yet it’s Lois Lane who arguably steals the show.

Once settled into their new world, Lois works just as hard as Clark at writing wrongs, putting her Pulitzer Prize winning investigative journalism skills to good use as the anonymous “Author X”.

Her exposes of corruption and criminality have led to a lot of positive change in the world, but have also made her a target. With her latest book on the criminal organisation Intergang almost ready for publication, the threats on her – and by proximity, Jon – begin to stack up. 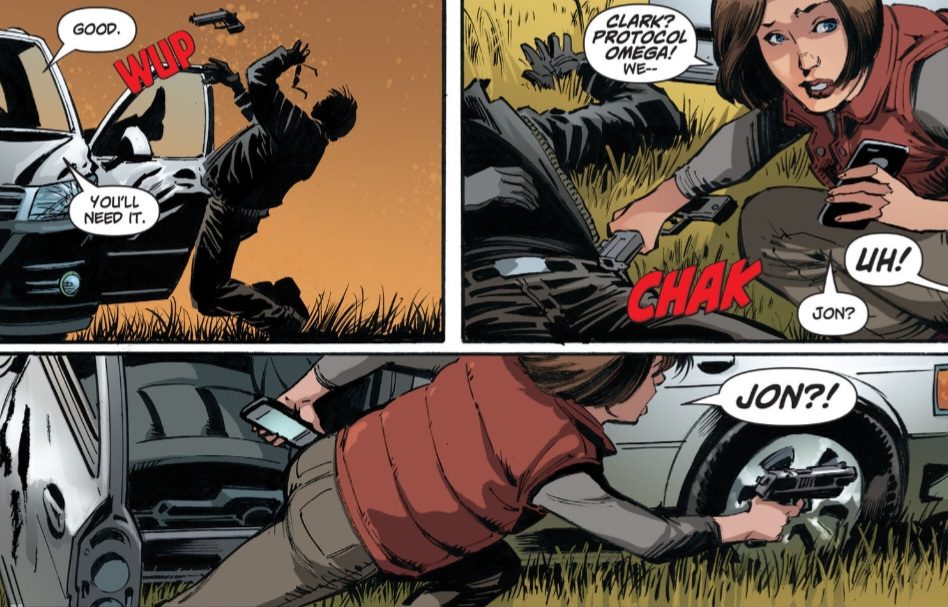 I really like the way Jurgens writes Lois here. She has agency and drives the plot forward through her own actions. But she’s not an idiot about it either and – apart from one mistake that comes from a place of altruism – she takes reasonable precautions for her profession.

Yet the characterisation I enjoyed the most was her calm composure whenever Clark was out as Superman.

Whilst Jon whittles about his father’s whereabouts, Lois simply carries on with life as usual. Her comparison of her situation with that of being the spouse of a policeman or firefighter is delivered with a believable lightness – after all, she’s not the kind of character to mope.

It’s one of the reasons that Lois has remained such an enduring comic character for so long.

As the story of Superman: Lois and Clark jumps around over 10 or so years, we get to see Jonathan at several different ages. 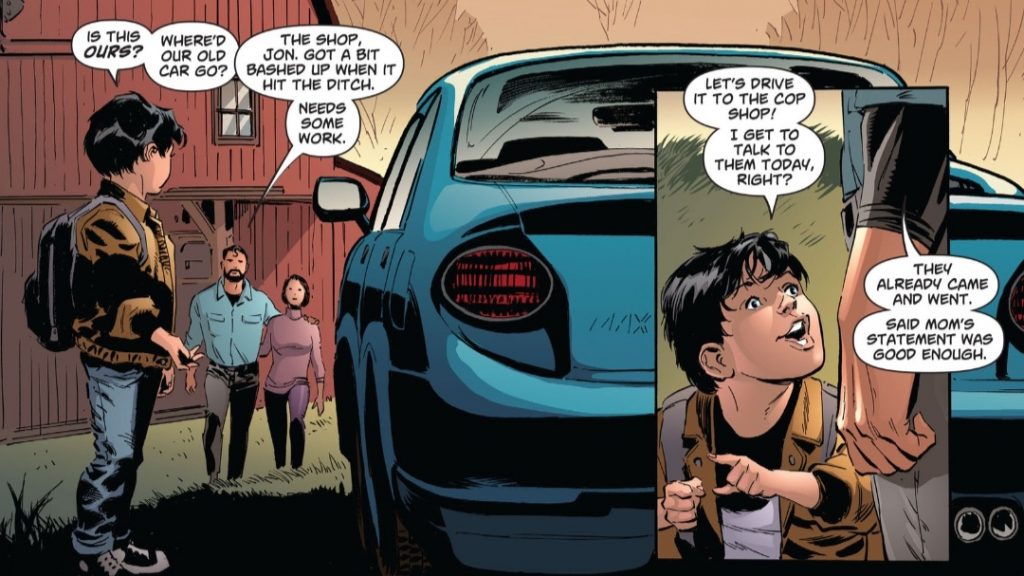 Jon’s an astute young boy who shows all the qualities of his parents. As Jurgens described him in a Newsarama interview, “he looks like Clark but has Lois’ spitfire attitude and inquisitiveness.”

This character shows itself through his preternatural sense of composure as events escalate. For the briefest of moments this took me out of the book – but then I remembered who his parents are and everything fit back into place.

Throughout the eight issues Clark faces many antagonists. The two most notable are the aforementioned Hank Henshaw, whose story is almost completely set up for a future payoff, and Blanque.

A one-note superpowered murderous psycho in a suit, Blanque is presented as the most formidable of this Superman’s b-list rogues gallery. Unfortunately, in Superman: Lois and Clark he just didn’t work for me. 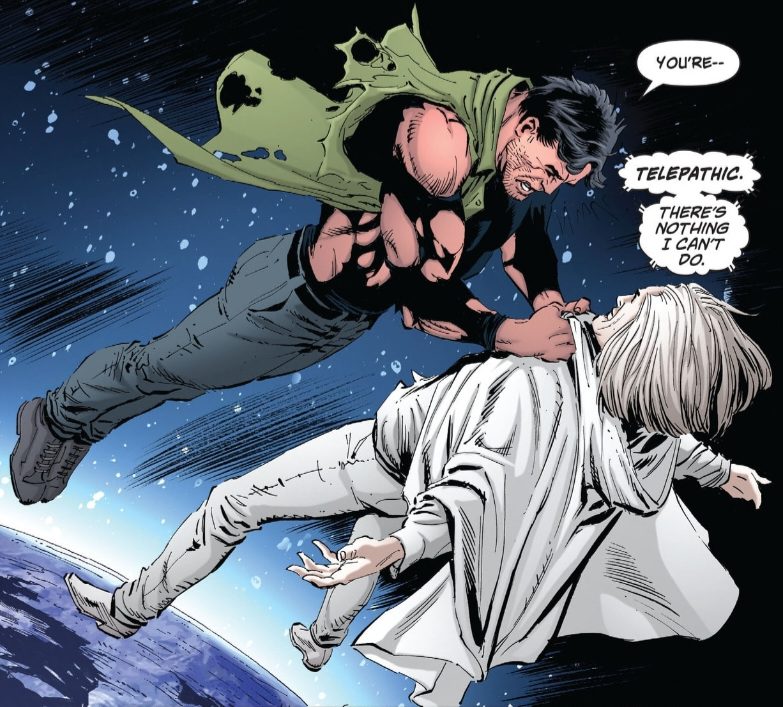 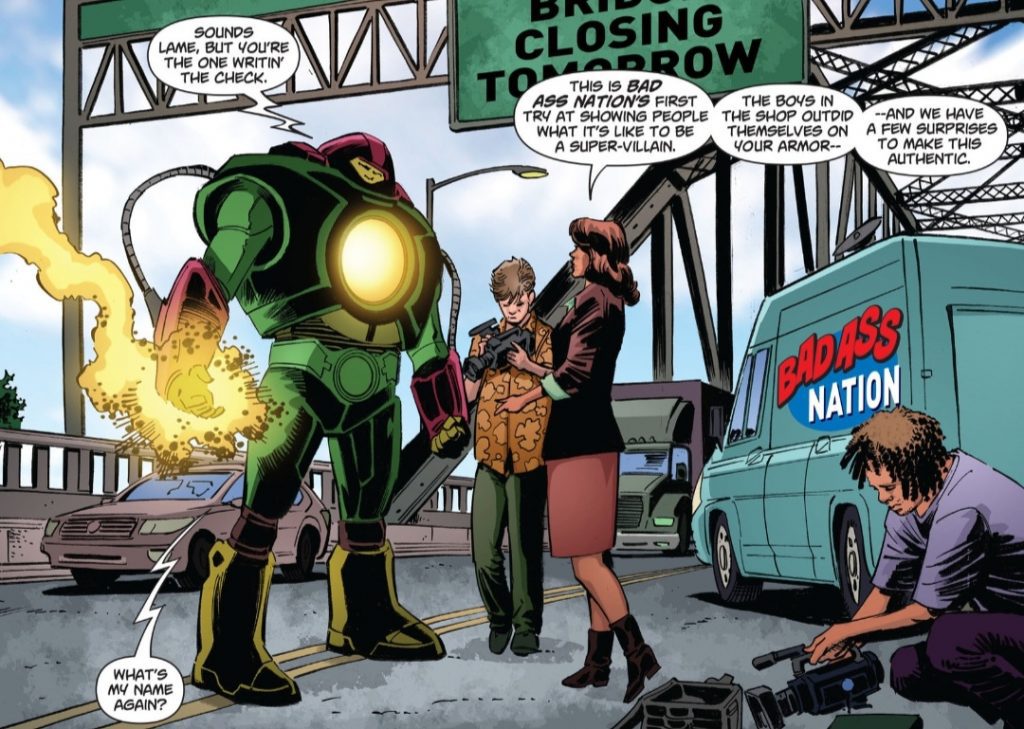 The story with Blackrock, an ex-convict caught up in a power suit and a TV reality show gone wrong, was much better.

The set up with Superman fighting to save people, stop the threat from getting worse, confront terrible values and still make it to save Lois and Jon in time gives this segment of the story real stakes. These kinds of stories are much more interesting to me than simple superpower versus superpower.

When Clark experiences a deus ex machina vision to set up the final confrontation with the murderous Hyathis, the story reverts back to superpower versus superpower. It’s a well told showdown, but ultimately feels like a distraction from the more compelling family story.

Superman: Lois and Clark is a wildly sprawling tale, but the seemingly disparate threads of the story do all (just about) come together by the end. Yet the story is strongest in the moments we see how this loving family grows into its new home.

First and foremost, Lee Weeks’ art is gorgeous. Like a sharper John Romita JR, his style is superheroic and cleanly composed.

His take on Clark is mighty without being imposing. Meanwhile Lois Lane has a dignified, sharp style to match her character. Jon is playful and well defined, although it is difficult to track exactly how old he is supposed to be for the main part of the book.

Weeks is a perfect match for the tone of Superman: Lois and Clark – which is why it’s a shame that he couldn’t complete the whole thing.

Marco Santucci teams up with Weeks for the art on Part: IV, and brings a slight horror sensibility to proceedings. It’s a jarring break from Weeks’ style, but it does suit Blanque’s appearance. 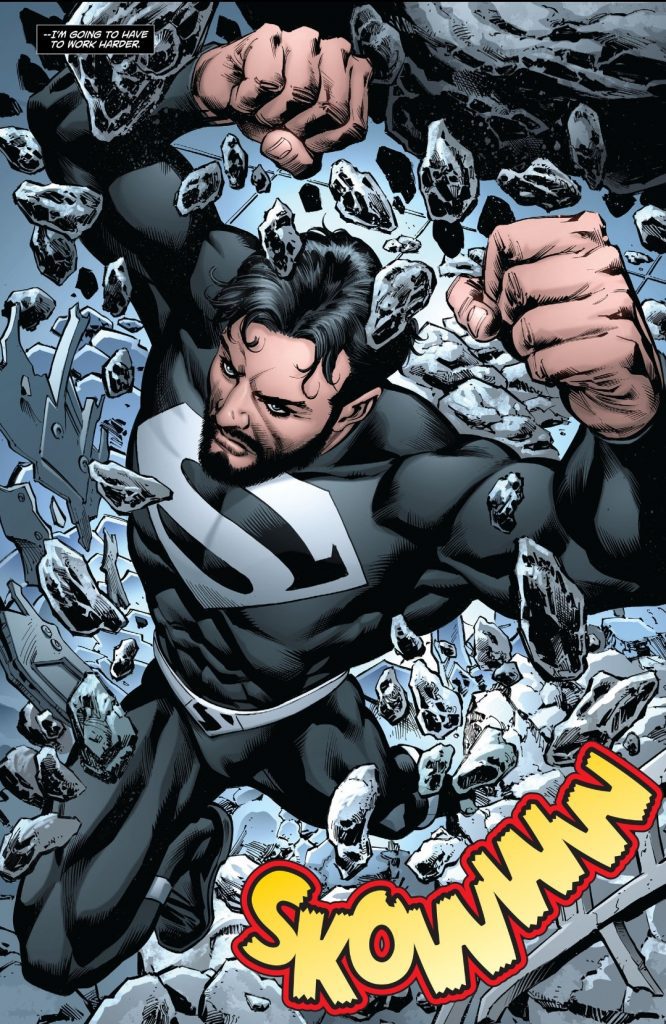 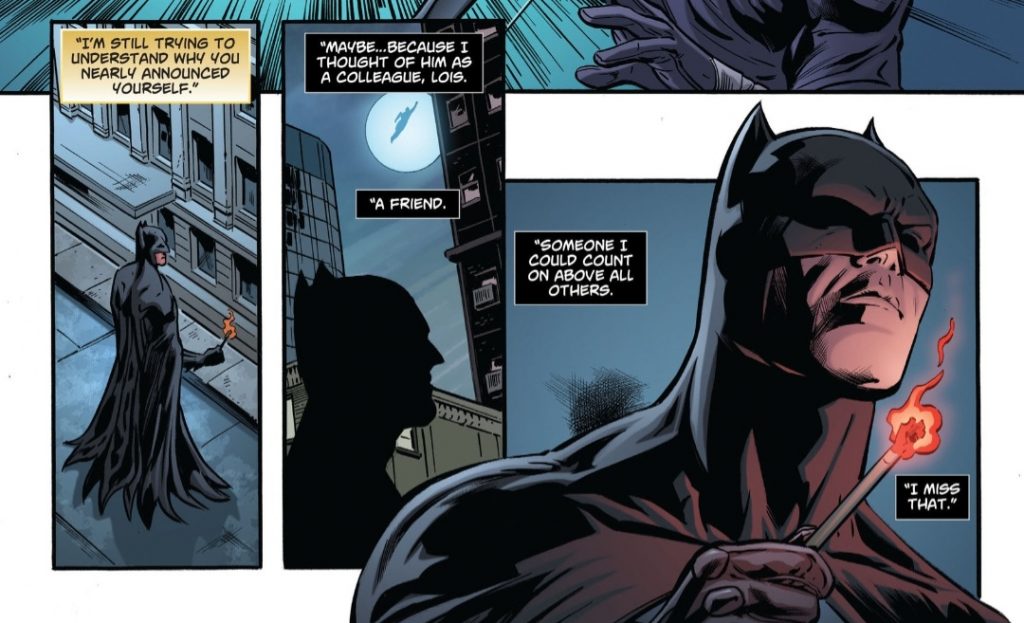 Neil Edwards takes over for Part V with a style that bridges Santucci and Weeks. His rendition of Batman (who has a small cameo) is excellent, and definitely makes me interested in seeing any work he may have done on the Dark Knight.

Finally, Weeks is joined by Stephen Segovia for Part VII. Segovia’s art is the best natural fit with Weeks’ style, and of all the non-Weeks issues this felt the strongest for my tastes.

Your tastes may vary, but then that’s what subjectivity is all about 🙂 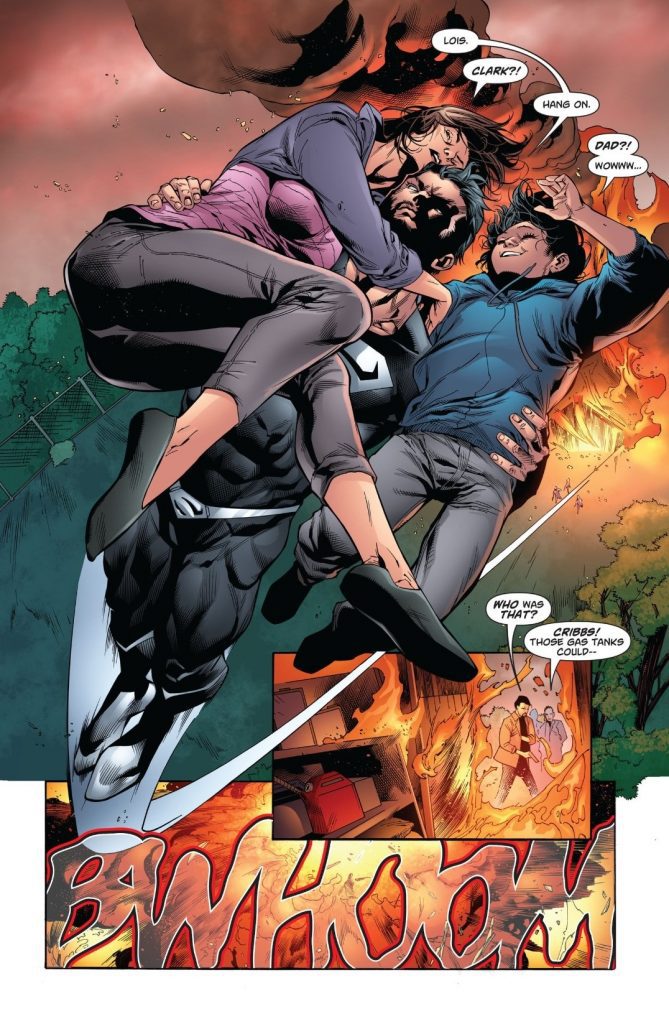 The trade paperback includes the cover for each individual issue without titles, as well as Lee Weeks’ and Scott Hanna’s inks for each cover. These are just as striking in black and white. You also get an untitled variant cover gallery (which includes a John Romita Jr cover), and four pages of pencils from Weeks and Stephen Segovia.

A little contextual information could have been good, but overall it’s not a bad package for a self contained story like this.

Should You Read Superman: Lois and Clark?

As a primer for DC Comics’ Rebirth event, Superman: Lois and Clark is essential reading.

Exploring the world through the eyes of newcomers is a common trope, but that’s because it works so well. From Clark’s views on the younger Justice League to the niches both he and Lois carve out in the world, we get to learn much more about this new era.

As you’d expect, that can make parts of the book quite lore heavy. But Jurgens never loses sight of the characters or the immediate stakes beneath all that history.

In fact, the brief alludes we see to the larger world are more enticing than intimidating. There were even some parts – particularly in the first four issues – which reminded me of how much fun comics can be. And that’s because – most important of all – Superman: Lois and Clark is just an enjoyable read.

And there are fewer reading experiences in the entire world of comics that are purer than a fun Superman story.

Do you like the sound of Superman: Lois and Clark? If so, buy it via the link below – it’ll help the site and won’t cost you a penny more. 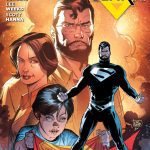