The problem with reading comics in trade paperback is that the stories are available as single issues for months before the collected version is available.

This makes visiting comic book news sites while avoiding spoilers a risky proposition – and that risk increases when it’s a high-profile book that you’re really excited to read.

As such, I avoided reading any articles on Spider-Man: Life Story to make sure the story took me by surprise the first time I read it.

In retrospect, however, I’m not convinced that this was the best course of action…

What is Spider-Man: Life Story?

Set outside of the usual Marvel Comics continuity, with Life Story writer Chip Zdarsky asks: what would have happened if Peter Parker had aged in real-time?

Starting out from the baseline that 15-year-old Peter was bitten by a radioactive spider in 1962, each chapter of the book tackles a different decade, forging a new continuity and re-imagining the major Spider-Man stories from each era.

On paper this re-telling of the Spider-Man mythos sounds like a great concept.

And with Mark Bagley (the definitive Spidey artist of the last 25 years) on pencils, it was a safe bet that the book would be – at the very least – gorgeous to look at.

However, even with no expectations going in, Spider-Man: Life Story still managed to be completely different to anything I would have imagined.

From the first chapter, it’s clear that Zdarsky is going in a very different direction to your usual Spider-Man.

Escapism this is not. 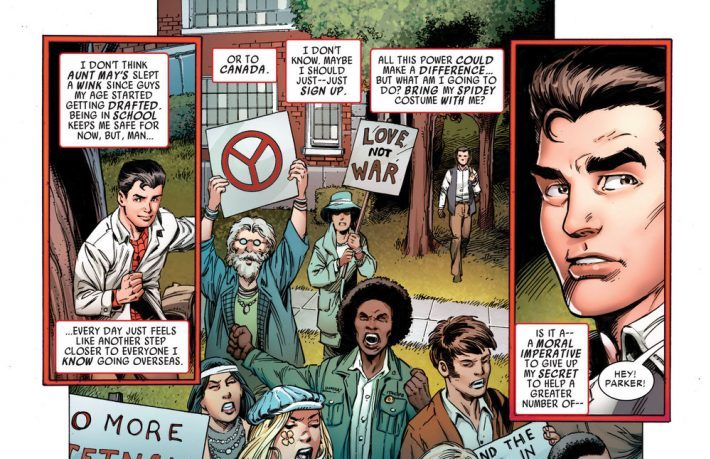 Set in 1966, the threat of the Vietnam War hangs over everything. The fear and anxiety that young Americans faced is the dark heart of the issue; so much so that a pivotal battle with the Green Goblin is almost filler compared to Peter’s dilemma over joining the war.

And it’s the appearance of Captain America – the walking symbol of America at its best – that drives home how much Zdarsky’s Life Story continuity branches away from the Marvel universe we know so well.

The next chapters of the book hammer this divergence home.

Familiar characters appear in unfamiliar roles, even if the outcomes turn out broadly the same as we’re used to. But it’s the way these outcomes play out, the impact they have on Peter’s life, that gives the book an inescapable sense of tragedy. 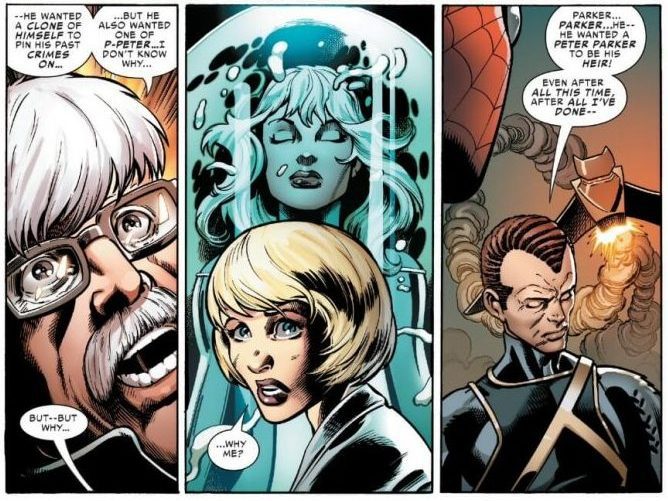 There are clearly big successes for Peter between chapters – marriage, career, fatherhood. But after the fear of chapter one, chapters two and three focus on tearing everything down through tragedy after trauma.

It’s not until chapter four – the 1990s – that Peter finally finds some semblance of control. As the head of Parker Industries, Peter manages to make both corporate shenanigans and his life as Spider-Man work. Yet there’s still the ever-present ghost of something missing.

It’s a revisiting of the decade-defining Clone Saga that brings the story to its head, with the machinations of Doctor Octopus and Norman Osborn coming to the fore. It’s in this most unlikely of settings that Zdarsky finally finds a way to give Peter a real win.

From here, the final two chapters deliver on the promise of the premise. 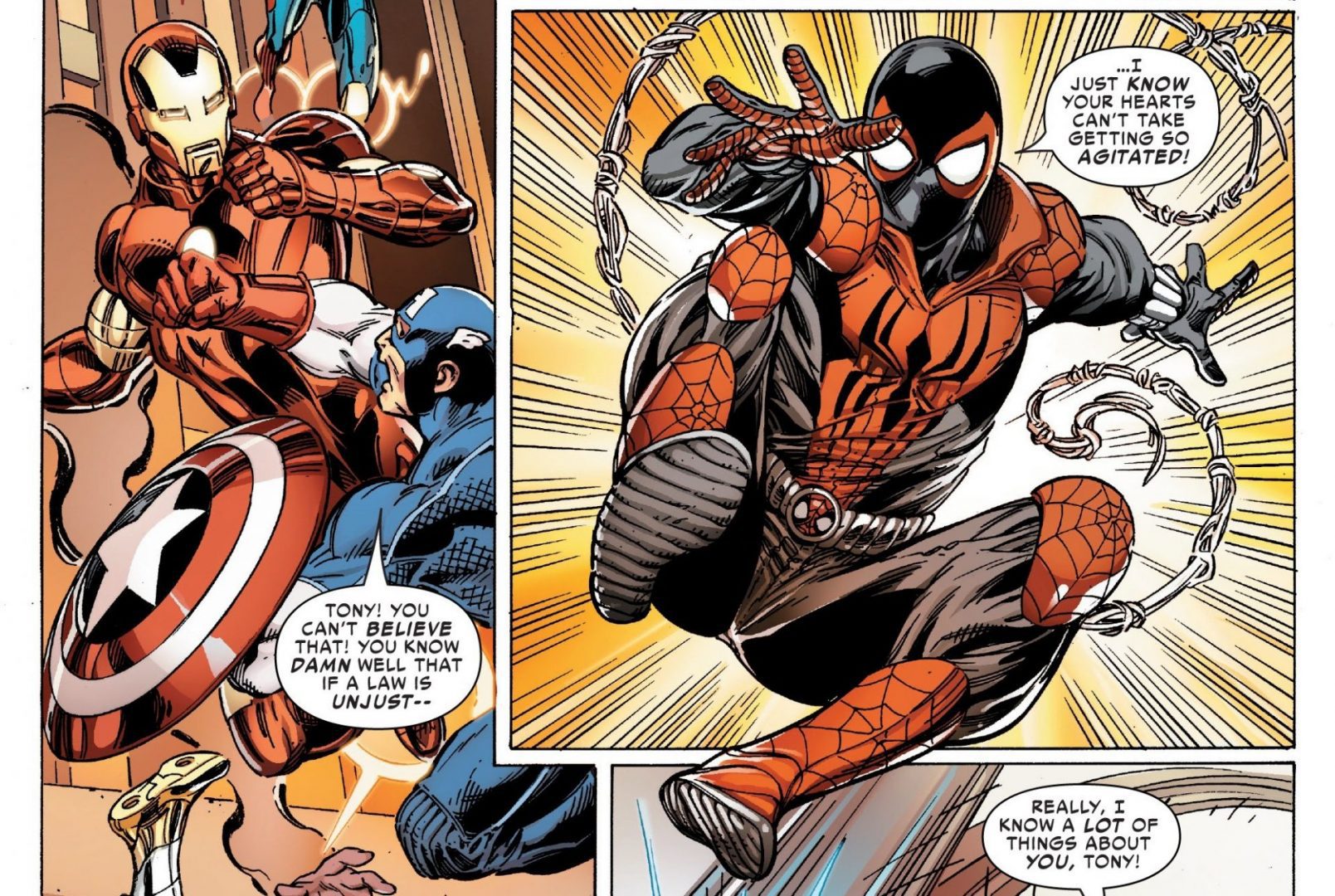 With the emotional gruel and continuity divergences established in the earlier books, chapter five feels more like a conventional comic book – an issue of Amazing Spider-Man from an alternate reality.

The re-imagining of Civil War is one of the high points of Life Story’s continuity. Captain America and Iron Man are set on opposing sides in the first chapter, and that sense of history adds weight to the conflict. We get to see very little of the cause of the fallout, and most of what we do see is from Tony Stark’s perspective, but it’s still one of the book’s better takes on the larger Marvel mythos.

The final chapter brings us right up to 2019, with Peter leading Miles Morales on a Return of the Jedi-style space mission (Peter’s words) to disable Doctor Doom’s war machines.

The issue uses chapter four’s Kraven the Hunter cliffhanger to dramatic effect, leading to a great (dare I say sweet?) payoff to the symbiote storyline. It also pulls in the most memorable story of the 2010s by re-imagining Dan Slott’s Superior Spider-Man epic – which in turn leads to a beautiful double-page spread of Spidey versus his most iconic foes. 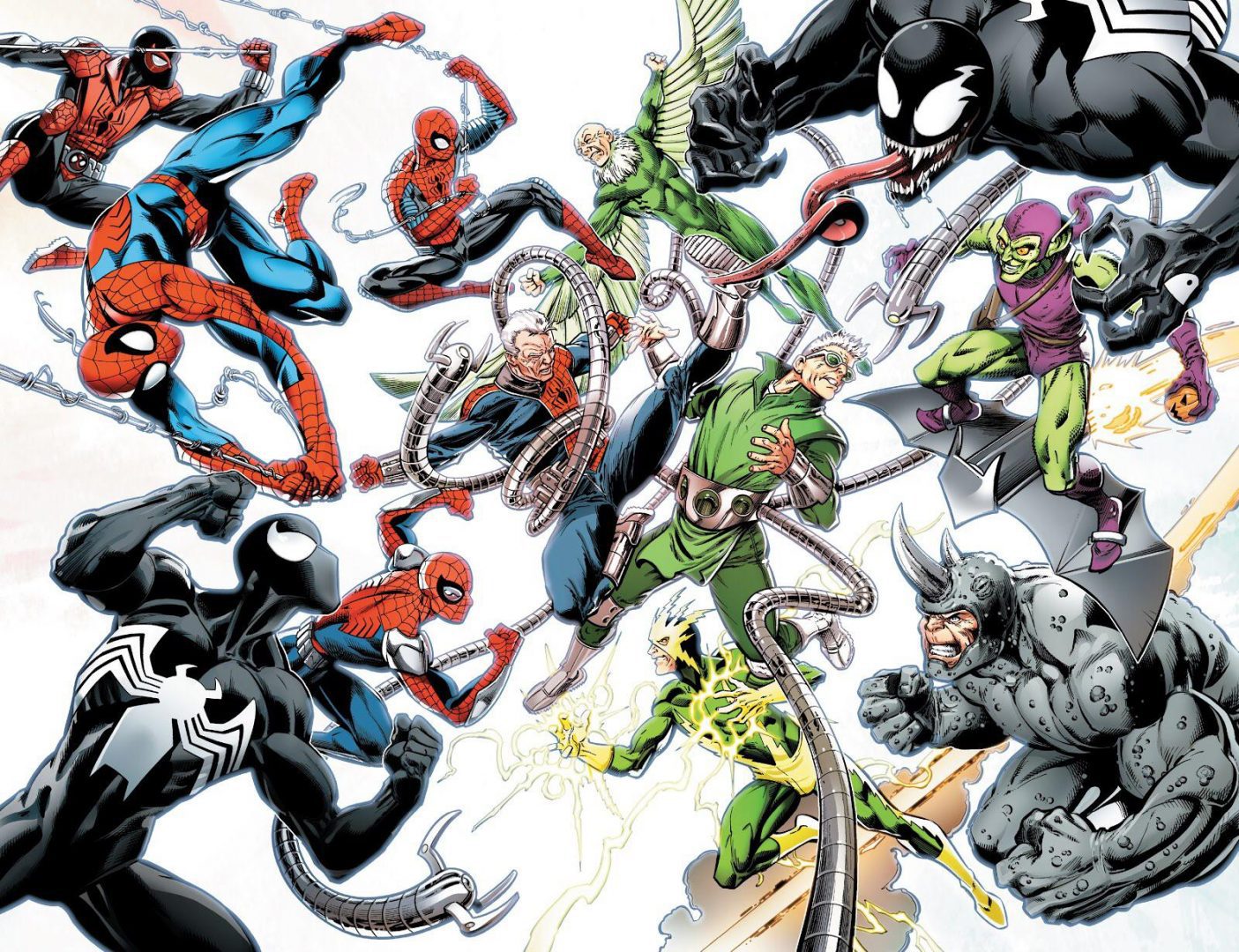 Despite the multiple villains and climactic showdown, the story retains a single focus. It’s probably the strongest chapter of Spider-Man: Life Story, and provides an elegiac ending to the series.

But sadly, that emotion doesn’t quite feel earned by the preceding issues.

By focusing so hard on the tragedies and stresses that befall Peter through the decades, Spider-Man: Life Story does very little to explore the other side of being Spider-Man. It forgets something that Nick Spencer’s Amazing Spider-Man: Back to Basics makes explicit – Peter does actually enjoy being Spidey.

So when it comes to Peter’s final moments – as beautifully conveyed as they are – Zdarsky is counting on the reader bringing what they know about Spider-Man from other comics to make the most of the experience.

Straight up, Mark Bagley’s artwork is incredible. Equal credit for the beauty of the art goes to John Dell and Andrew Hennessy on inks and Frank D’Armata on colours. It’s the skill of this team that elevates the book as a whole.

Yet it’s Bagley taking point. His feel for the characters is a highlight as he portrays Peter, MJ and others through the years. 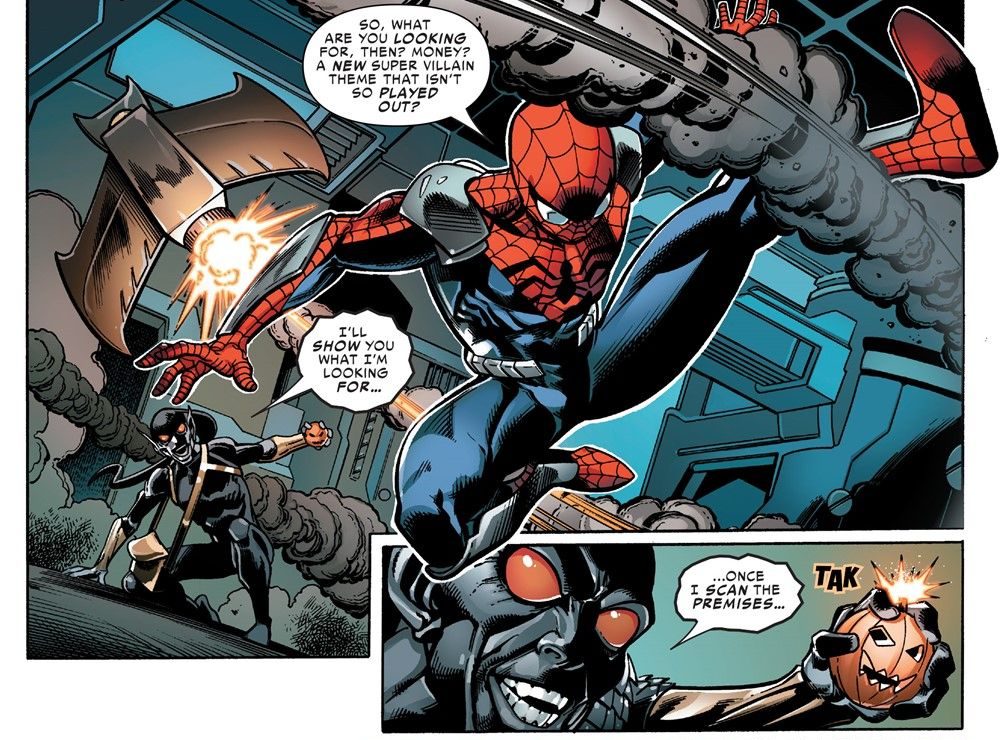 The action sequences – and there are a lot – flow seamlessly from frame to frame. There were no moments where I had to think about what was happening; my brain could simply enjoy the beautiful visuals. The quiet, emotional moments hold equal clarity.

That said, some sequences do feel cluttered. My guess is that’s a consequence of the compressed storytelling rather than a stylistic choice.

But overall, the art does what it needs to do.

One of the most fun elements of the book is seeing the various costumes Peter uses throughout the years. It’s not only Spidey who gets new duds – there are different looks for the second Green Goblin, Venom, and Miles Morales (amongst others). 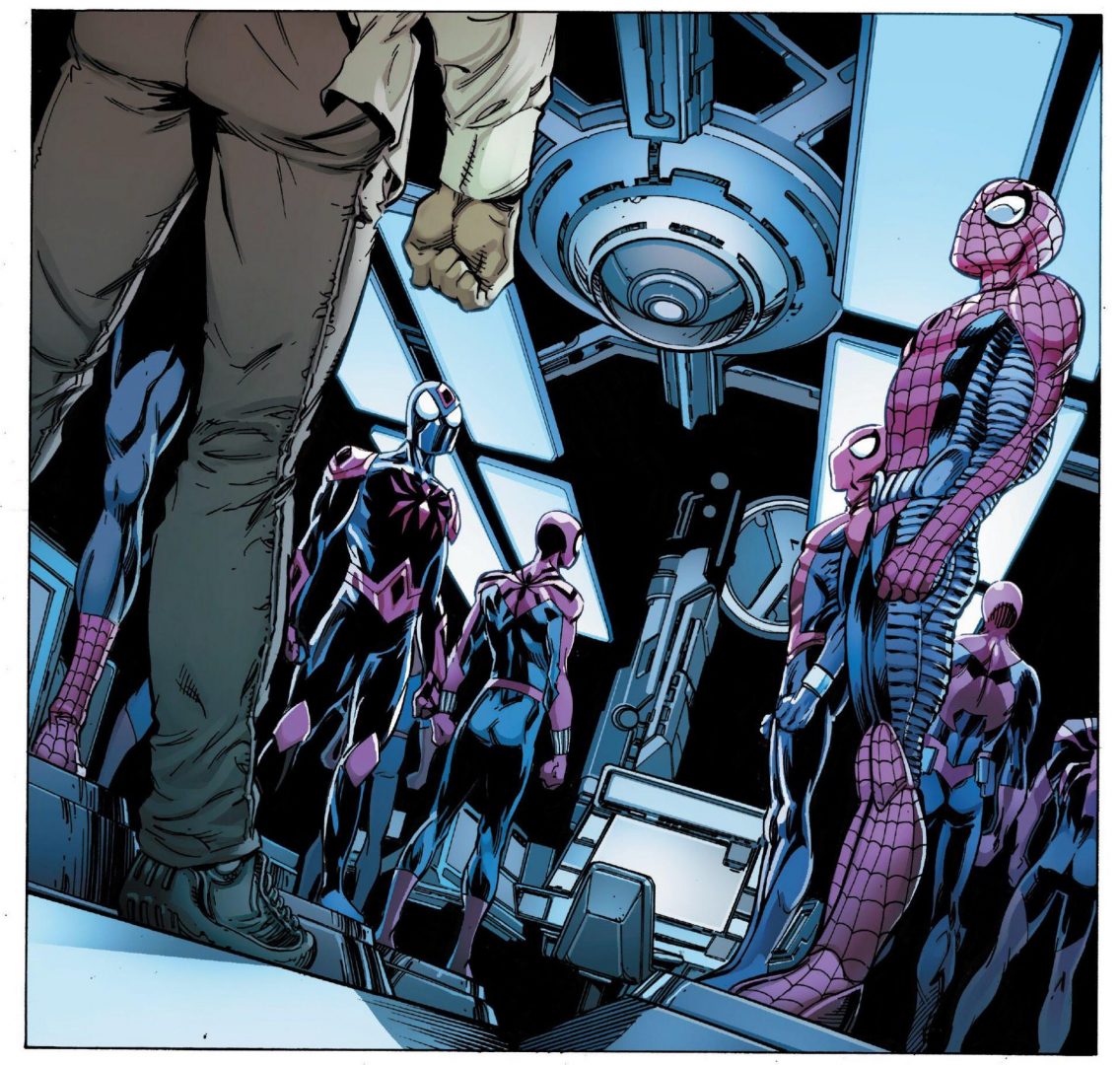 As a lifelong fan of Bagley’s work, my bias is undeniable. Even so, I would put Spider-Man: Life Story up there as one of the best-drawn Spider-Man stories yet.

The but – and it’s a big one – is that the vibrant artwork isn’t the best match for the pessimism of the story.

It’s not the Spider-Man life story that you might have expected.

But if you know the character and you’re familiar with the major story arcs from the last six decades of comics, then Spider-Man: Life Story is definitely worth reading.

Just be sure to have some classic Spidey comics on-hand afterwards to remind yourself that it’s not all bad being Spider-Man. 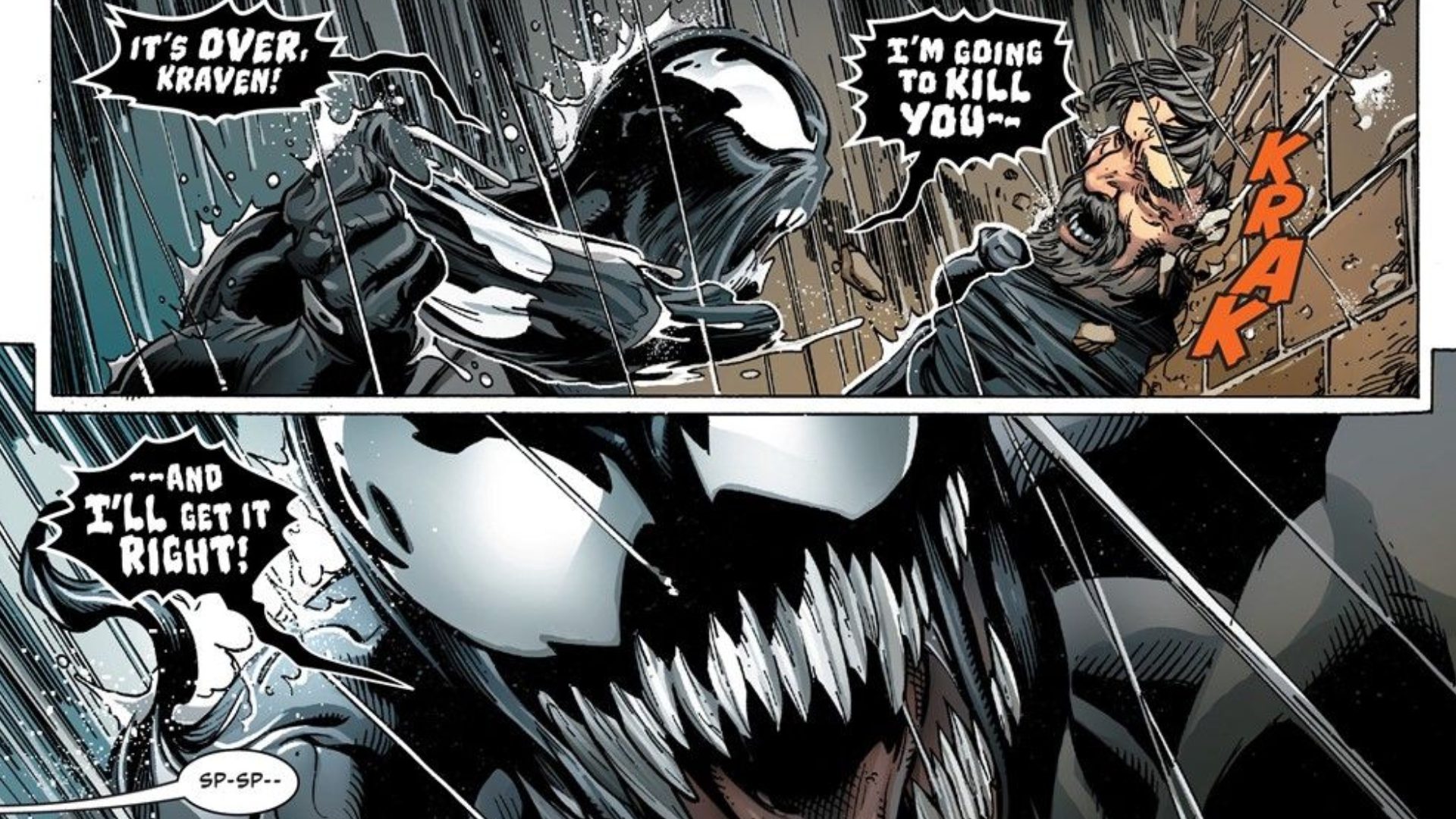 Like the look of Spider-Man: Life Story? Buy it via the link below and it’ll cost you the same great price while Amazon sends a small cut my way to help me to keep the site up and running.

A gorgeous miniseries by Jeph Loeb and Tim Sale in which Peter Parker reminisces over his life and adventures as Spider-Man while talking to the memory of Gwen Stacey. Beautiful in every sense of the world and widely held as one of the best Spidey stories yet.

A crossover story set early in Peter and MJ’s marriage that turned Kraven from a bit player bad guy into one of Spidey’s greatest threats. If you like your Spider-Man stories dark, it doesn’t get much darker than this. By J.M. Dematteis and Mike Zeck.

A re-imaging of the sprawling 1990’s Clone Saga by Tom DeFalco, Howard Mackie and Todd Nauck. This re-do doesn’t fit seamlessly into the existing continuity but it tells the story with more focus (and significantly less interference), and all for the better. 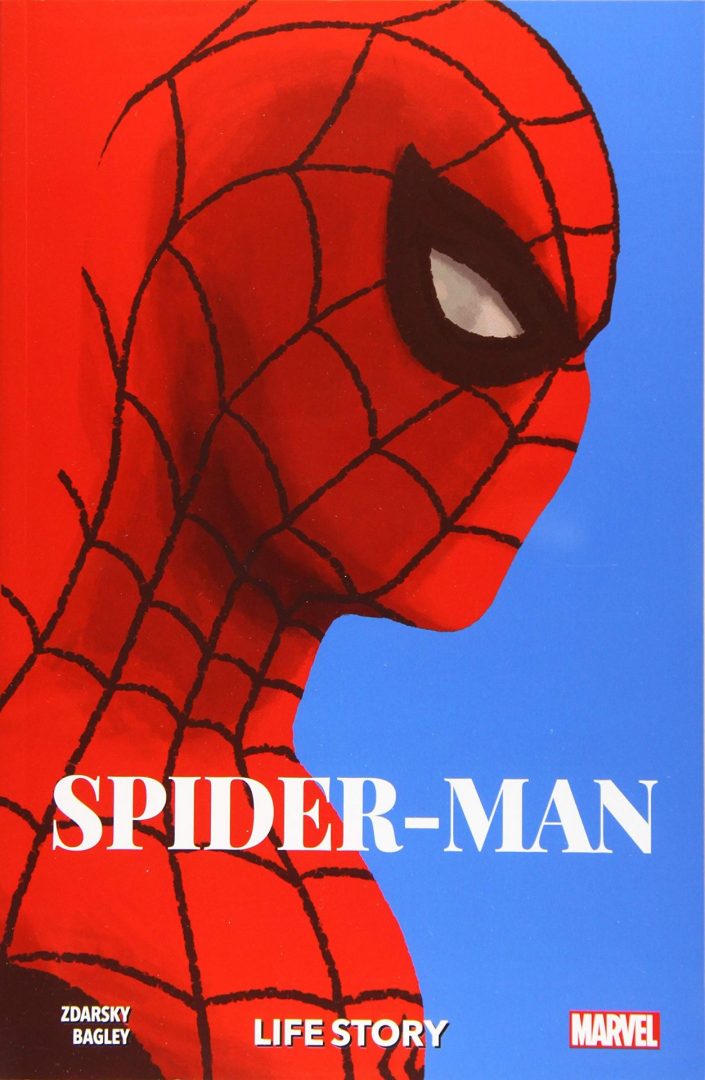