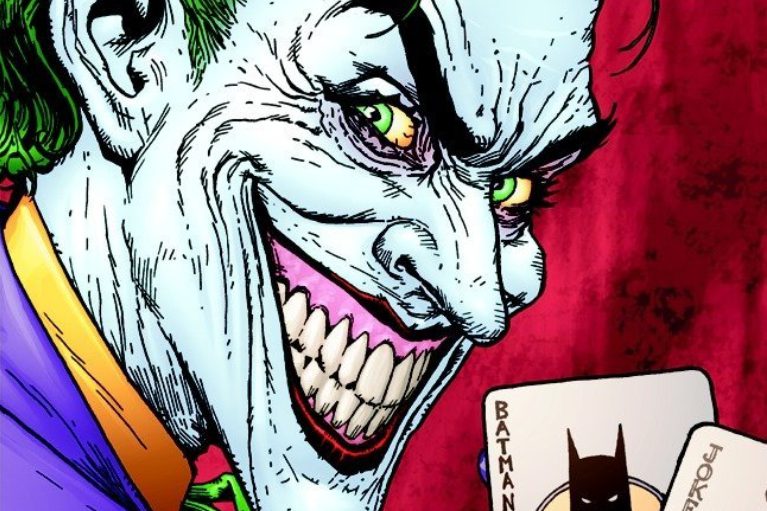 It’s difficult to think of another supervillain who can share top billing with their superhero nemesis, let alone steal the show. Yet, in the many years since his debut, the Joker has done just that.

Since his debut in 1940’s Batman #1, the Clown Prince of Crime has gone on to become a cultural icon in his own right – which is quite surprising given the type of character Joker is.

The Joker isn’t a cartoonish villain (well, he used to be, but that was due to the Comics Code Authority rather than any creative design). No, he’s a cruel, lethal, chaotic force of rage. His crimes are heinous, and his murders are numerous. He’s a sophisticated, terrifying force of nature.

With that in mind you could question his suitability as a cultural touchstone, yet he has that status all the same. The Joker is the perfect foil for Batman, and the two may be the most iconic protagonist/antagonist duo in modern Western pop culture.

But how did this great conflict begin? 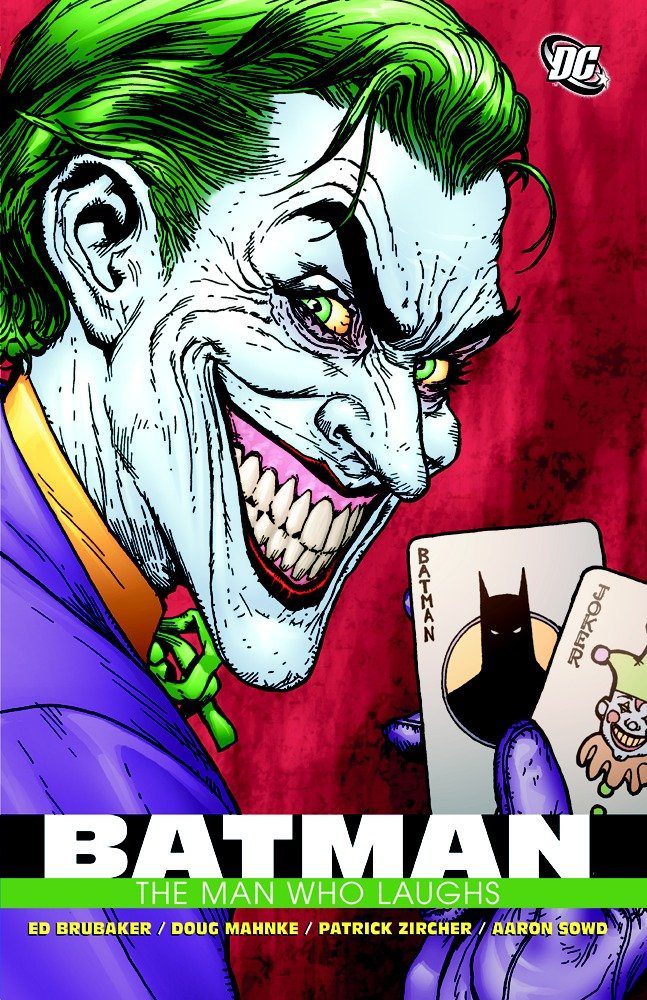 What is Batman: The Man Who Laughs?

A one-shot “prestige format” 64-page comic, Batman: The Man Who Laughs first came out in February 2005. It’s one of those rare examples of the format changing to suit the story, rather than the other way around (see also Daredevil: The Man Without Fear).

Following on from Batman: Year One, the comic covers Batman’s first in-continuity encounter with the Joker. And it’s about as bruising a story as you might expect… 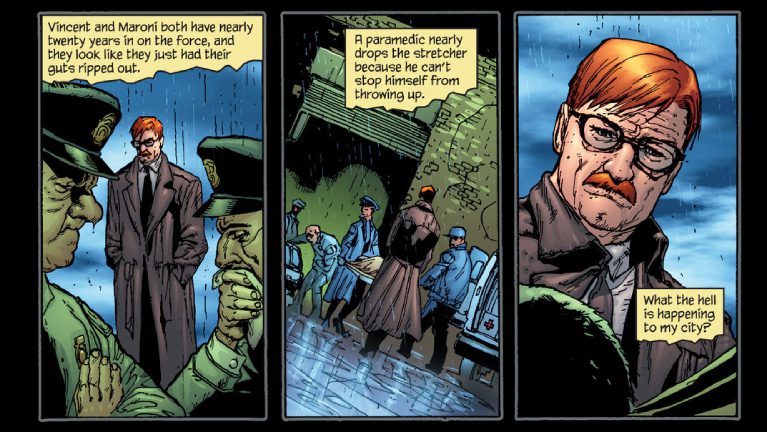 Brubaker and Mahnke hit us hard and fast with the Joker’s brutality, opening with the discovery of chemically mutilated corpses in an abandoned factory.

Where Brubaker excels is in telling the story from both Captain Jim Gordon’s and Bruce Wayne’s/Batman’s internal perspectives. The two narrate the story in the style of a baton race, providing us with pulp fiction-style insight into events as they unfold.

While Batman’s deductions and reasoning are as thorough as you’d expect, Gordon’s monologue adds depth to the story. He is acutely aware that he is among the last of the old guard in a world overrun with superheroes and villains. His discombobulation with the changing world helps to sell both the realism of the story and the horror of the Joker’s violence.

And as for Joker’s scheme? He does what he does best, bringing Gotham City to its knees with nothing more than a flashy suit, a gun, and a genius-level intellect in chemical engineering. 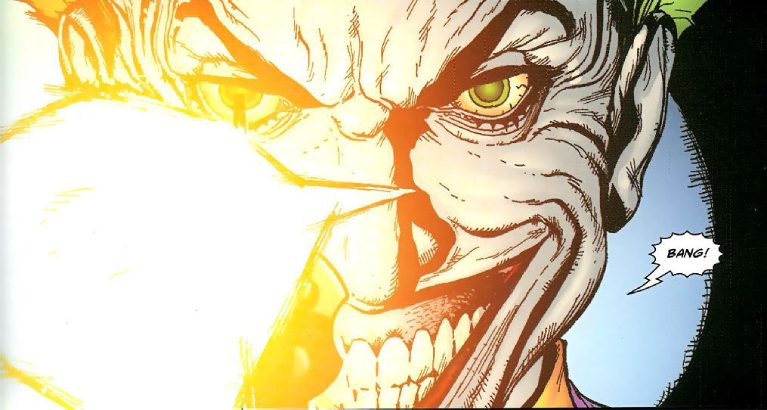 It’s a plan that involves lethal distractions, subterfuge, and – ultimately – mass murder. And it pushes Batman to the edge of both his sanity and his morality to bring the madman to justice.

The Joker is suitably unhinged through his actions. His dialogue is a little rote – no memorable one-liners – but it gets the point across.

Brubaker’s Batman, on the other hand, is fantastic. As Bruce Wayne (who actually plays a significant role in the story), he’s cocksure and unfazed. Yet as Batman – still early in his career – he exhibits some self-doubt and uncertainty. 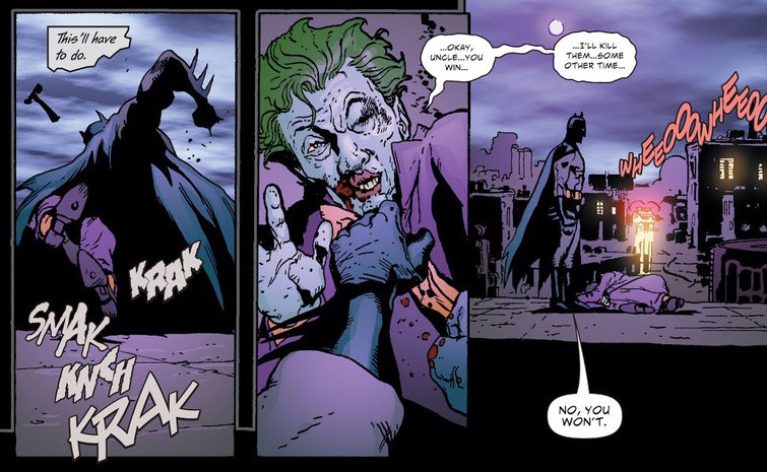 This plays out during the conclusion of the story. Batman could end it all there and then by dropping Joker into the poisoned reservoir, but reassures himself that “I can’t.” Reprieved, the Joker threatens to kill the residents of Gotham some other time, to which Batman responds “no, you won’t.”

The inverted dialogue sharply illustrates their opposition. It’s a clever piece of writing that helps the story work so well as their first confrontation.

I admit that I always thought the cover of Batman: The Man Who Laughs was ugly enough to be off-putting. However, the adage “don’t judge a book by its cover” is true for a reason…

Mahnke’s art is fantastic throughout. The forms and shapes of his characters are crisp, but the additional lines and textures give everything a grittiness that matches the story. The action sequences (of which there are plenty) are clear and fluid. 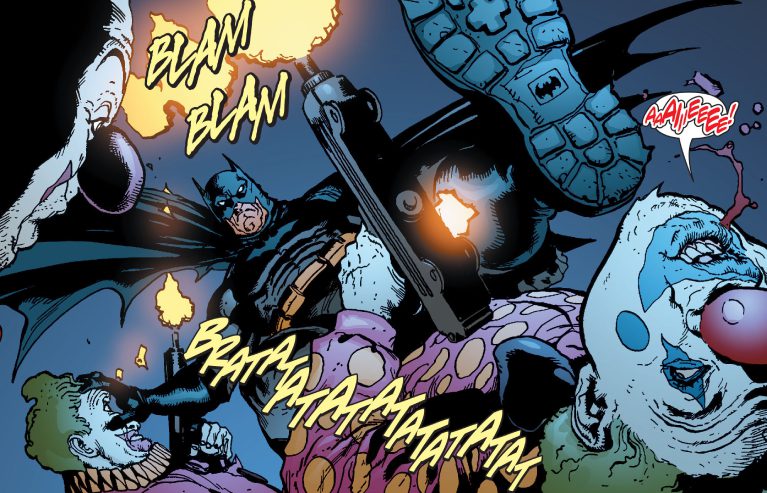 Every character – whether they’re as prominent as Bruce Wayne or a briefly seen GCPD officer – is wonderfully drawn. This includes the grotesque horror of the Joker’s first test subjects early in the book.

Mahnke’s Batman is physical and imposing, but you still believe he can blend into the shadows. Yet it’s his Joker who steals the show. Maniacal yet astute, wiry yet imposing, this version of the character – physically, at least – commands every scene that he’s in.

There’s perhaps more of Joker’s essence in the illustrations than in Brubaker’s dialogue, which shows quite how well Mahnke grasps the character.

Yet it’s not all down to him. Colourist David Baron does a great job of illuminating Gotham City in teal and orange.

It’s the dominant palette until Bruce experiences a nightmare sequence, which introduces a green hue. This leads into the purple hues that dominate the climax, until Batman wins the day and the teal and orange returns. 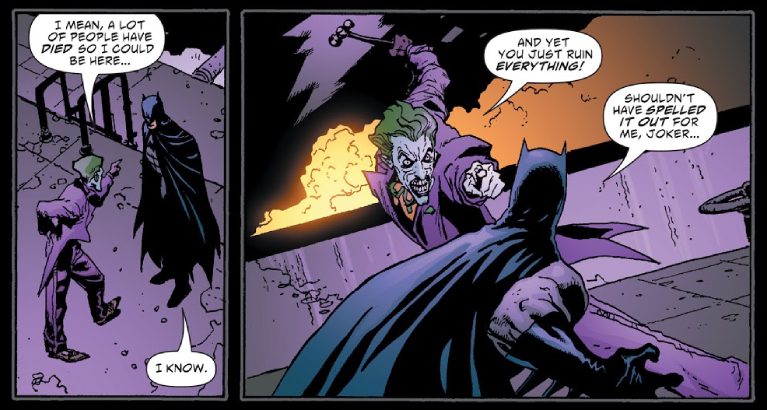 Baron’s Joker is superb, looking sharp in purple, orange and green, along with red lips and terrifying bloodshot eyes. It’s a tried, tested, and proven combination against the grey, blue and yellow of Batman.

One thing that stands out is that all but everyone in the book is a white male. With such a big cast, that seems like a hell of an oversight for a book made in 2005.

Is Batman: The Man Who Laughs Worth Reading?

In a word, yes. Batman: The Man Who Laughs is definitely worth reading.

It’s not revolutionary. It neither redefines the character nor tells a story of earth-shattering importance. What it does is tell an exciting, effective story about Batman’s first encounter with the Joker.

That alone is worth the price of admission, but when you add Gordon’s ruminations on the changing world around him it becomes an illuminating – if small – window into the early years of the DC universe.

Most of all though, it’s only 64 pages long. You’re going to lose nothing by reading it… and you might just have a swell time, too.

You can buy Batman: The Man Who Laughs right here. If you buy it via the link it’ll help the site and won’t cost you a penny more. Sounds like a win-win, right?

Batman: The Man Who Laughs 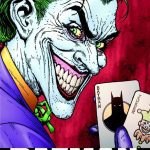 Buy Batman: The Man Who Laughs